An Avatar of Self: A Conversation with Mira Schor is so rich it had to come out in two parts. Amanda Beroza Friedman's conversation with painter and writer Mira Schor's for Art 21 explores Schors take on painting, time, video and most interesting modest painting.

A painting can open up time, liberate it—when you paint or when you look at a painting. That’s the time I’m interested in and I think that kind of time does defy commodity culture. more

What matters to me is a kind of rigor towards painting itself, whether it be medium or subject matter. It’s not that an artist like Tworkov did not have an ego, or desires for career and name, and yet he was driven by larger ideas about meaning and methods of achieving meaning. Recently I spoke about the concept of modest painting and found myself including a filmmaker like Stanley Kubrick as an example of that quality of modesty: if you channel surf and land in a Kubrick movie you can’t stop watching it. Why? Because he has subsumed his own ego to form, he is working with narrative of course, but also framing, lighting, sound, timing, all the characteristics of film. It’s not just about him.  more 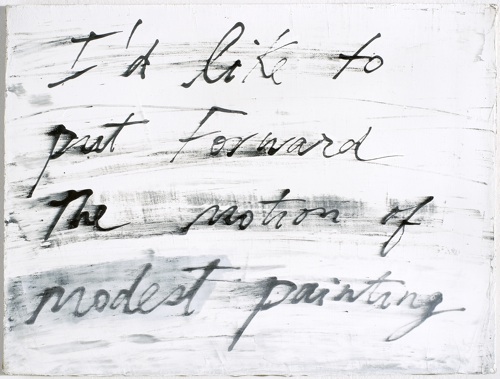