The Neue Gallery's Degenerate Art: The Attack on Modern Art in Nazi Germany provided a stark contrast between approved and censored speech.  Degenerate Art was a term coined by the National Socialist Party, and an exhibition of this work traveled the county for three years. Placed side by side Adolf Ziegler's triptych "The Four Elements" 1937, was considered a masterwork by Hitler and belonged to his collection. Max Beckman's triptych "The Departure"  1932-35, was included in the Degenerate show.

Holland Cotter reviewed the show and wrote specifically about this pairing

In Ziegler’s painting, the subject is obvious: Four blond academic female nudes decorously display themselves along with traditional symbols. Beckmann’s Expressionist picture is all mystery: Scenes of human torture fill the side panels, while at the center a cluster of stylized, possibly allegorical figures stand, as if waiting to push off, in a small boat.

Hitler loved Ziegler’s art. He chose “The Four Elements” for the big Munich show, then hung it over the fireplace in his home. Working through his minister of propaganda, the wily Joseph Goebbels, he also gave Ziegler the go-ahead to do a purge of modernist art from state-owned museums, a campaign that produced the “Degenerate Art” show but continued well beyond it. Eventually, some 20,000 pieces — Beckmann’s triptych among them — were confiscated, to be sold, hoarded or destroyed.

So the two triptychs broadly define the official view of good and bad (evil) art in the Nazi era. 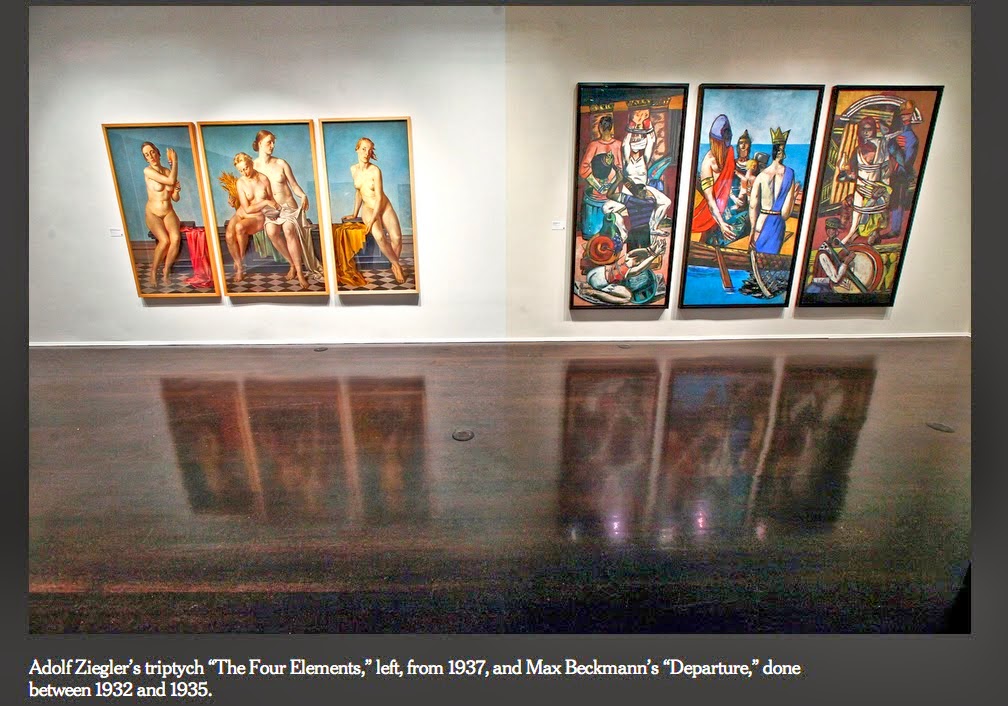