Here are a couple of images from April Gornik's exhibition at Danese/Corey. There are also some beautiful charcoal drawings in the show.  John Seed interviewed Ms. Gornik for the Huffington Post and asked her to speak about one of the works in the show, she chose the image above


One of the paintings is called Green Shade, which is a reference to that great Andrew Marvell poem. It was an image I came up with by collaging, in Photoshop, various photos I had of the woods out back behind our house. I wanted to do a painting that had a kind of midsummer feeling, ripe and full but with a certain amount of stirring in the leaves & the light. I wanted dappled light, which turned out to be pretty daunting to paint, and I wanted an almost vertiginous sense of entry into the painting, so there's a kind of tipping of some of the trunks of the trees, the ground, etc.
I start with a sketch, then work it out compositionally, then get the canvas -- and in this case I'd done another painting that was fall-like for my last show and have the intention to eventually make four seasons with the canvases the same size: 6 x 9 feet. Then I draw out the painting from the sketch, marking particular points from the sketch which are proportionate to the canvas exactly -- like where the fattest tree meets the top -- but then drawing in most of it freehand, then underpainting with colors that will I hope give some dimensionality to the top surface colors. I need to actually have a dimensional plane on the surface to work from: you can see that pretty clearly in the other paintings as well; vestiges of the underpainting coming through in spots.
Then comes a loooong time of just painting away, and watching the painting move in a direction I hadn't anticipated, which almost always happens, adjusting for that, adding and subtracting whole areas, etc. This is finally followed by the long dance to the end of the painting where at that point it looks like a painting should fundamentally, but isn't good enough. So that entails endless small adjustments and occasionally major changes. In the case of Green Shade the streaky lights and shadows of the forest floor were endlessly reworked. The color of the trunks of the trees kept changing: and then there's a point at which the painting just kind of closed up and was finished, and I couldn't get back into it. 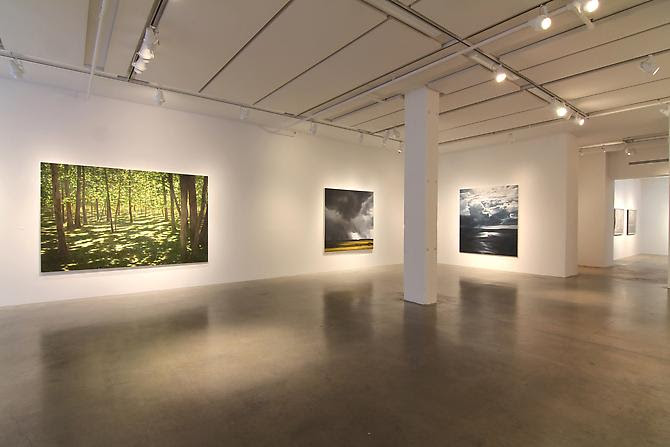